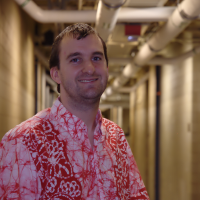 I was born in Tunbridge Wells, UK in 1978. I developed a fascination for complex systems through my university degree (at Durham) in molecular biology and biochemistry, especially in the idea that there was a more comprehensive approach to studying the evolving systems of life as opposed to analysing bio-macromolecules one at a time. I actively pursued a career in computational modelling of biological systems through my MSc in bioinformatics (at Birkbeck College in London) and two jobs here at Northwestern in bioinformatics during which time I developed my computational skills.

I joined the IBiS program here at Northwestern in 2004 with almost the single-minded aim of joining this lab knowing I would rarely get the opportunity to work in such an environment again and I would be fulfilling a dream of my own, in researching complex systems. Additionally I am a huge soccer fan and sorely miss playing in the winter in England where a slide tackle in the cold rain and mud was as exhilarating as it could get.