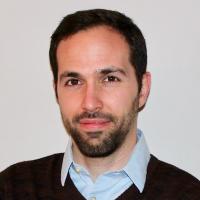 I was born in Portugal. For as long as I can remember I have always been interested in how and why nature and the universe work. So, when it became time to go to college, physics was a natural choice for me. From there, I discovered the fascinating worlds of network science and game theory, which became the basis of my master’s degree. Later, I became aware of the notions of “Big Data” and “Data Science”. I realized that we have an urgent need to make sense of the vast amount of information that we as a society are now constantly generating. We need to use data science in order to better understand complex systems, improve social conditions, foster economic growth, create better evaluative tools, etc. The possibilities are immense.

In December 2011 I joined the Amaral Lab and started a PhD in Chemical and Biological Engineering at Northwestern University. I am currently working on a science of science project where I try to understand how to quantitatively measure and predict the quality of scientific output at all levels.