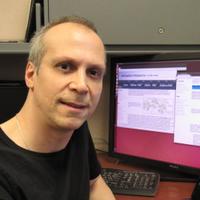 Dr. Cristián Huepe is a physicist conducting research in complex systems, nonlinear dynamics and statistical physics. He has worked in various subjects throughout his career, including: superfluidity, Bose-Einstein condensates, a toy cosmology model, finite-time singularities, spatiotemporal chaos, defect dynamics, and Faraday waves. His current research focuses on the dynamics of collective motion and complex networks.

Dr. Huepe obtained his PhD in Physics at the École Normale Supérieure in Paris, after completing undergraduate studies in his native Chile. He then worked as a postdoc in Chicago, first at the University of Chicago and later at Northwestern University. In 2006, Dr. Huepe won a three-year NSF research grant to develop his project “Collective Behavior of Complex Systems with Long-Range Effective Interactions: A Network Approach”. Since 2009, he has worked on a new NSF research project “Experimental and Theoretical Analysis of Collective Dynamics in Swarming Systems”, together with Prof. Iain Couzin and his lab at Princeton University. Dr. Huepe was a Visiting Scholar at Northwestern University’s Department of Engineering Sciences and Applied Mathematics from 2006 to 2011, and a Guest Scientist at the Max Planck Institute for the Physics of Complex Systems (Dresden, Germany) in 2011. He has also had extended visits at the City University of Hong Kong and the Instituto de Ciencias Fisicas, UNAM, Mexico. In 2006, he started Cristian Huepe Labs Inc. to carry out his research as an unaffiliated scientist. His work has been featured in Science Daily, Focus Online, National Geographic Germany and Wired Magazine, among others.

In addition to his academic work, Dr. Huepe produces and performs electronic music. He has released several albums as labo_labs and as part of Makers of Sense, a duo with Chicago hiphop artist Brother El. He also develops projects at the art/science boundary. He organized the workshop “Networks and nonlinearity in the musical experience” at the ZiF Center for Interdisciplinary Research (Bielefeld, Germany) in 2011, will present the invited paper “Generating Music from Flocking Dynamics” at the 2012 American Control Conference, and is an organizer of the “3rd Leonardo Satellite Symposium on Arts, Humanities, and Complex Networks” for NetSci2012.