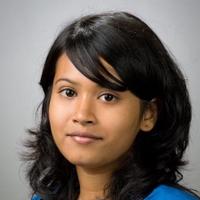 I am inherently interested in quantifying randomness in biological systems and understanding their real-world impact. Growing up in a military family in India, I was fortunate enough to live and study in several diverse regions of the country from rainforests to deserts. This piqued my interest in the sheer adaptability and beauty of the natural species that live in these dramatically different ecologies. As an undergraduate, I combined my love of mathematics and biology to study bioinformatics and biotechnology at the University of Pune. During this time I explored various facets of research by completing projects in computational biology, microbiology, regeneration and immunology. These experiences solidified my interest in stochasticity and adaptability in biological systems, leading me to take this up as my graduate school research focus.

As a graduate student, I developed tools to quantify stochasticity in gene expression. This led to the discovery of novel roles for microRNAs and insulator elements as stochastic noise filters and amplifiers, respectively. It also suggested that biological systems are much more variable than previously thought, and that this variability is not necessarily a product of genetic mutations or environmental perturbations. Indeed, my work suggested that gene expression noise might be a necessary factor in resolving self-organized pattern formation.

In the Amaral group, my research focuses on quantifying variability in two different spheres. The first is variability in response-styles of test-takers in online personality surveys. Personality traits are predictive of numerous individual characteristics, such as economic activity and interpersonal behavior. However, self-reports of behavior are notoriously biased and unreliable. Therefore identifying and quantifying different biases would help to increase the predictive power of models of economic or social behavior. The second area of research is quantifying variability of protein expression in single cells from flow-cytometry experiments. Traditionally, such data have been manually analyzed which tends to decrease the reproducibility of experimental results. I aim to build a process-driven model that will automate flow-cytometry data analysis so as to increase experimental reproducibility.