A Mastodon bot for learning about new genes

A lot of our laboratory’s research concerns the attention gap for human genes: a small fraction of human genes receive a large majority of our collective research attention. Often, biologists choose to research genes that are already well-studied, even though understudied genes are just as likely to be intimately associated with human disease.

To play a small role in fighting this discrepancy, I created Gene of the Day, a Mastodon bot that posts about one new human gene every day. Biomedical researchers tend not to interact with genes they know little about, so I figured this would be a bemusing and enlightening source of information for scientists worldwide.

This isn’t my first foray into botmaking; I previously created a Twitter bot that posts the daily United States Air Quality forecast. This time around, I was hesitant to launch this bot on Twitter given the current state of Twitter and its developer API. Now that many scientists have moved over, I thought that Mastodon was better suited to host the bot at this time.

The bot uses data from NCBI Gene, PubTator, RCSB PDB and Uniprot and is hosted on botsin.space, a bot-friendly Mastodon instance. Every day, the bot selects a random human gene (excluding previously-posted genes) and posts bibliometric and database-specific information about it, as well as an experimentally-derived protein structure if one is available.

I chose to center bibliometric information on the gene over functional information for three reasons:

The bot’s source code is available under the GPL-3.0 license on GitHub. If you have feedback or questions, I encourage you to submit them as issues on the bot’s GitHub page. I also encourage you to reply to posts with fun facts about the daily gene if it happens to be one of your favorites. Here is an example post: 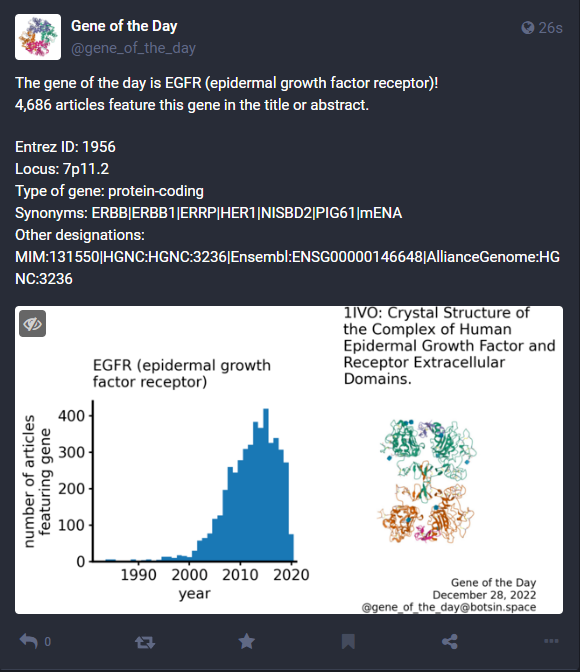 I believe that projects like these can help spur discussion and foster curiosity in the sciences, and there are plenty of other examples of this kind of creative botmaking (see @netzschleuder, @strangeattrbot, @ThreeBodyBot or browse botwiki for more examples). I encourage others to think about making similar bots. Making bots for Mastodon is relatively easy, so if you are interested, do not hesitate to reach out. I hope you enjoy Gene of the Day!