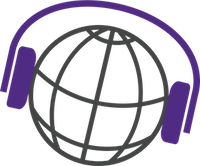 And here you have an example of what you can listen to with Earthtunes:

(Earthquake occurred in Alaska on May 1st, 2017, magnitude 6.2m recorded from Ryerson, IL)

The development of the Earthtunes app started about four years ago. We launched a first version for Android devices, but is was hard to maintain and subsequently discontinued. In December 22nd, 2020, we relaunched a brand new version of the app, still named Earthtunes.

This new release had a simple interface for downloading data from IRIS Data Services (https://service.iris.edu/irisws/timeseries/) and listening to these waves in higher octaves (at that time, we called it “speed up factor”).

After this first release, we were learning and developing new functionalities. One of the most important was to add a dozen or so well-distributed and long-lived seismic stations to a map and allow the user to pick one of these stations easily.

In June 2021, we took a big leap by adding Challenges. Each Challenge is a bit of information to learn something about our Earth (or Mars). To implement this new feature, we designed an internal file format to store the needs of the challenges, like: title, text, images, maps and waves. This brought us to implement a Challenge Editor: an internal app that we use to write the Challenges.

In this new release, we learnt how to extend functionalities of the app and we wanted to go further: why not implement a kiosk mode?

On the summer of 2021, we worked on this new feature: set an ipad with Earthtunes in a stand for the public to see and interact with. When the app is in non-interactive mode, it will show a map and play random waves around the world: Finland, Uganda, Chile, New Zealand… These wave sounds represent seismic signals from energetic events such as earthquakes, or ambient seismic noise, which can be equally fascinating as the signals. If you want to set it up in your exhibition or museum, send us an email!

The kiosk mode was released in November, 2021, and we presented the new Earthtunes version, including kiosk mode, at the AGU Fall Meeting in New Orleans (December, 2021).

That was a huge achievement for us: we did it!

The last release, February 2022, became with new features when defining your own station and, an exciting and important improvement: now Earthtunes can play infrasound records as well.

What will the next version bring? We do not know yet, but we are working on it!