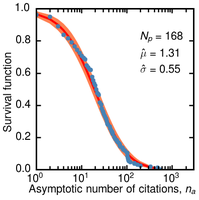 How to quantify the impact of a researcher's or an institution's body of work is a matter of increasing importance to scientists, funding agencies, and hiring committees. The use of bibliometric indicators, such as the h-index or the Journal Impact Factor, have become widespread despite their known limitations. We argue that most existing bibliometric indicators are inconsistent, biased, and, worst of all, susceptible to manipulation. Here, we pursue a principled approach to the development of an indicator to quantify the scientific impact of both individual researchers and research institutions grounded on the functional form of the distribution of the asymptotic number of citations. We validate our approach using the publication records of 1,283 researchers from seven scientific and engineering disciplines and the chemistry departments at the 106 U.S. research institutions classified as "very high research activity". Our approach has three distinct advantages. First, it accurately captures the overall scientific impact of researchers at all career stages, as measured by asymptotic citation counts. Second, unlike other measures, our indicator is resistant to manipulation and rewards publication quality over quantity. Third, our approach captures the time-evolution of the scientific impact of research institutions.