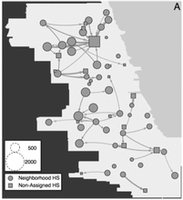 The currents beneath the "rising tide" of school choice: An analysis of student enrollment flows in the Chicago Public Schools

Existing research highlights that families face geographic, social, and psychological constraints that may limit the extent to which competition can take hold in school choice programs. In this paper, we address the implications of such findings by creating a network of student flows from 11 cohorts of eighth-grade students in the Chicago Public Schools (CPS). We applied a custom algorithm to group together schools with similar sending and receiving patterns, and calculated the difference in mean achievement between a student's attended and assigned high schools. For all identified school groupings, we found that the students were on average moving to higher achieving schools. We also found that the movement toward higher achieving schools of the top achievement quartile of students was over twice as large as that of the bottom quartile, but that the flows of both the highest and lowest achieving student quartiles were toward higher achieving destinations. Our results suggest that student movements in CPS between the years of 2001 to 2005 were consistent with creating market pressure for improvement as well as increasing segregation by achievement. However, further research into how schools responded to those movements is required to make inferences about the level or consequences of competition generated by choice-related reforms during that time.