Northwestern's Board of Trustees is an outlier

An analysis for the consideration of Chair of the Board Barris, University President Schill, and the Northwestern Community. You can download a PDF version of the full report here.

At Northwestern University, as in many other Universities, the Board of Trustees (BoT) establishes policies for the governance of the University and oversees management of the institution and its finances. Specifically, the Board selects and appoints the President of the University, has the final decision on the awarding of honorary degrees, on the promotion and tenure of faculty, and on the revision of the Faculty Handbook. The Board also sets the guidelines for investment of the university’s endowment.

At the May 4th 2022 session of the Faculty Senate, the then chair of the Board, Mr. J. Landis Martin, noted that the Board of Trustees would be undergoing a program review, which at Northwestern is a “multi-faceted process that systematically evaluates each of the University’s academic and administrative units once every seven to ten years.” During program review, the Office of Administration and Planning (OAP) collects data, works with the target unit in developing a self-study, and organizes a review visit with external experts in the field as well as an internal team. At the end of their visit, the panel of external experts prepares a report, and the OAP then coordinates an implementation plan for the report’s recommendation and conducts follow-up reports.

Because the program review is a closed process, and because the Board plays such a critical role in overseeing the institution, I believe that it is critical that our faculty, staff and students be made aware of how the structure and governance of our board compares to the boards of peer institutions and to the recommendations of experts. While not the only possible reference point, I use a recent report by McKinsey & Company titled Shaping university boards for 21st century higher education in the US as a benchmark for evaluation. In the section ‘Redefine Board structure,’ the McKinsey Report states:

Let us then see how Northwestern’s Board of Trustees compares to other boards and to this benchmark, so that the program review might probe the benefits of restructuring the current Board. The following analysis compares the Northwestern’s board to the boards of 19 private peer universities, using publicly available data. Table 1 presents the list of peer institutions and their board size. The Appendix lists the coding categories used in assessing a Trustee’s professional background. The raw data and python coding are available upon request.

Table 1. The twenty Private Universities included in analysis (number of trustees + number of life trustees, if different from zero). Only 3 other institutions, besides Northwestern, appoint life trustees.

Board Size & Gender Diversity. Northwestern’s BoT includes two categories: trustees and life-trustees. My first analysis compares the size of boards of our peer institutions both excluding and including life-trustees. As Figure 1 demonstrates, Northwestern’s BoT (purple dot) is about 3 times larger than McKinsey’s recommended size, and nearly twice as large as the median board-size of our peer institutions (red line). The boxes represent the range between 25% and 75% of the sizes observed, while the lines extending outward from the boxes capture the range of expected board sizes given the data’s statistical characteristics. The purple dots show that the size of Northwestern’s board is outside the statistically expected size, and thus that Northwestern’s BoT is a significant size-outlier.

Another way that Northwestern is atypical is that it is one of only four institutions in the studied cohort that appoints life trustees. When including life trustees, the size of our board is even more exceptional: nearly four times as large as the median size of other boards (red line), and nearly twice as large as the second largest board.

Figure 1. Sizes of board of trustees and female representation across 19 top private universities and comparison to Northwestern’s BoT. Three of these 19 universities – and Northwestern – appoint life trustees.

Northwestern also does not have as much gender diversity as many of our peers. Even excluding the less diverse life trustees, Northwestern’s BoT still includes only about 34% females (purple dot), which is below the median value for the boards our peer institutions (red line). While Northwestern is not an outlier when it comes to gender diversity, given the large size of our board and the possibilities it offers diversification, one might question whether the Northwestern community should be happy with the current level of gender diversity especially considering that female students are now a majority in ours and many other campuses.

Varied Set of Board Capabilities. McKinsey’s report notes that for many BoTs the composition and the design of boards has not been adjusted for the twenty-first century environment. BoTs typically provide expertise in the fields of higher education, non-profit management, and in the management of the endowment. In addition, because universities are expected to prepare students for work in varied occupations, BoTs could be expected to include members from varied occupations. For institutions such as Northwestern, meaning institutions that include schools in Business, Communication, Education, Engineering, Journalism, Law, and Medicine, we might further expect representation based on the occupations covered by their schools. Figure 2 categorizes trustees based on their listed or inferred professional backgrounds, and it places Northwestern’s BoT in comparison to the cohort of trustees at the other 19 institutions. The figure demonstrates that BoTs trend towards having many representatives from the fields of finance and consulting. That said, Northwestern stands out for having a finance-heavy and education light BoT. 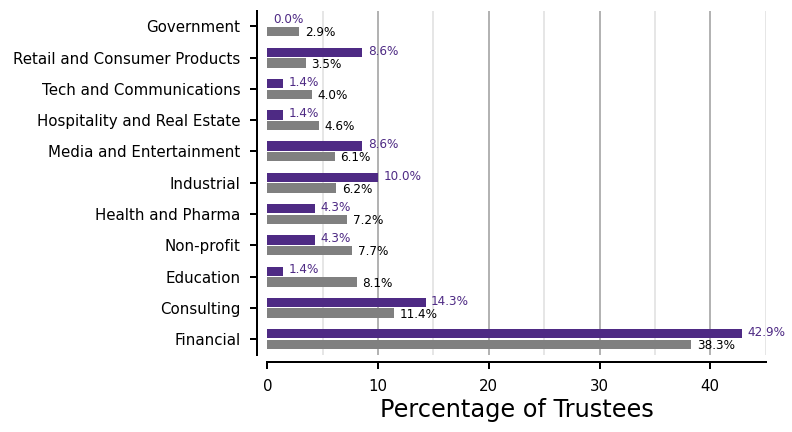 Term Limits. McKinsey’s report of good board practice recommends term limits, noting that “without term limits or rules around term lengths, it can be difficult to foster change and create opportunities for new leaders.” (p. 7). Many universities do not explicitly state the terms of their trustees, although sometimes one can infer a term length from press releases announcing new board appointments. Even if terms are delimited, several universities appoint some trustees to two or more consecutive terms.

For Northwestern, it is unclear what the term limit is. The category of “Life Member” suggests that for a segment of the board, the term has no end date. Northwestern and a few other universities also seem to appoint children and spouses of trustees to the board, which again suggests that certain board members may become super trustees with built-in constituencies and unequaled influence.

Figure 3. Term limits on Boards of Trustees. Term limit information was ascertainable for 15 of the 20 universities in this analysis. 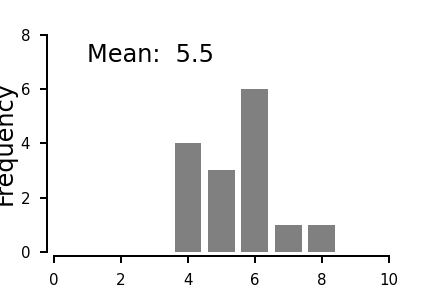 Figure 3 displays the data for the 15 universities where term limits were ascertainable. For these universities, the average term was 5.5 years, with a mode of 6 years. The McKinsey report identifies several reasons why term limits, or a lack thereof, may affect a Board. Some concerns include a lack of up-to-date expertise and relevant training, risks that arise from long term membership, and the difficulty that new members may have in asserting board leadership. That said, the bottom line seems to be that universities need to decide and balance priorities when it comes to board composition.

The dominance of finance and consulting on Northwestern’s BoT poses several concerns. One issue is the potential for conflict of interests in decisions about real estate, construction, the purchase of services or software, or the hiring of consultants. A second issue is whether financial decisions are always disinterested. Conflict of Interest policies and firewalls can mitigate these concerns, yet the combination of unlimited terms and the dominance of certain backgrounds makes these concerns worthy of serious consideration. A third concern is that the combination of consulting and finance backgrounds and the BoT size means that significant additions, such as adding five or even ten trustees with diverse backgrounds, may do little to affect committee or board demographics and dynamics.

Looking ahead. Top research universities are places of learning, teaching, sharing, and creating. Universities today are also facing new challenges, including the changing nature of student bodies, heightened international competition, and a more complex health, political, financial and security environment. Boards of Trustees can play a critical role in guiding universities provided they have the required diversity of thought and experience.

It is fortuitous that this academic year Northwestern is both welcoming new leaders (President Schill and BoT Chair Barris) and that the Board is going through Program Review. This confluence of events offers a unique opportunity to critically reflect whether better governance could have helped Northwestern more successfully navigate the difficult moments that it has faced, including the downgrading of Northwestern’s financial rating, the controversies surrounding the cheer team and the appointment of the VP of Athletics, the declining investments in faculty, the loss of competitiveness of salaries, and the lack of investment in facilities for the social sciences. While the Board of Trustee’s self-study and review will presumably remain confidential, in this case, we believe that shared governance requires that the Northwestern community learns the reasoning that stands behind any decision to keep or change its unusual structure and composition.

To add your name in support use this form.